A lobster Found with Pepsi Emblem “tattooed” on Claw 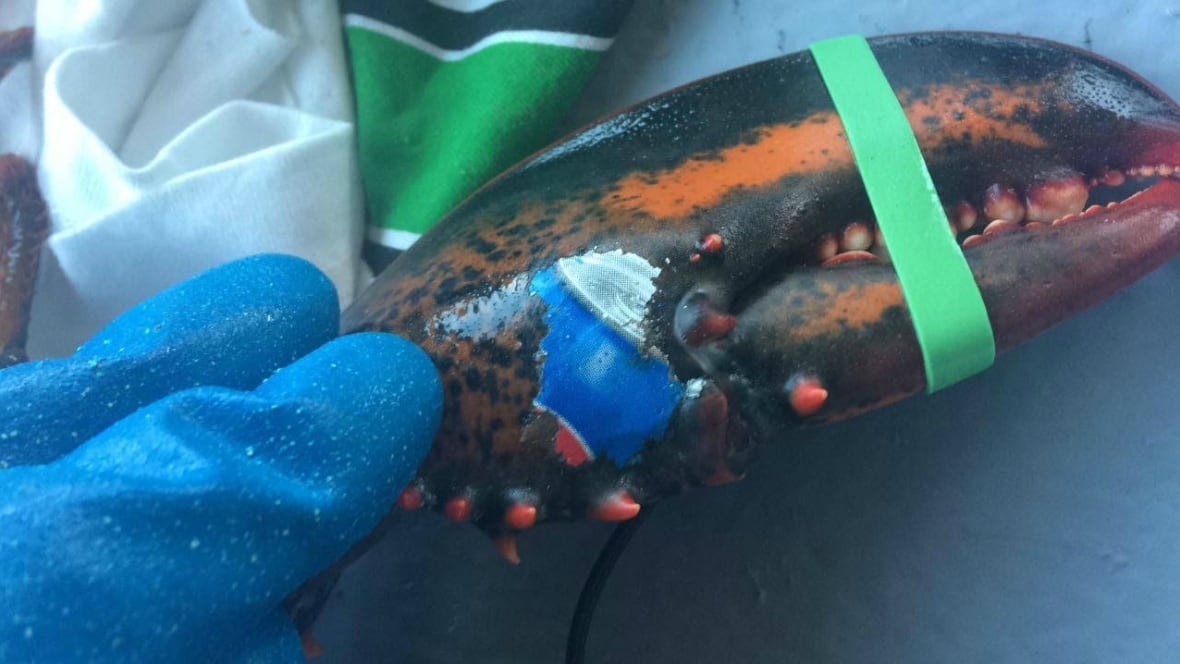 Reveals that a woman on a boat named Honour Bound, off Grand Manan, found the Pepsi’s blue and red logo imprinted on one of the lobster’s claws she was banding. Karissa Lindstrand had already spent at least five hours going through stacks of lobster claws, when the emblem caught her eye. As a Pepsi consumer and fan, she admits to drinking around 12 cans a day, she reveals that this is the first time she has ever seen anything of the sorts.

“I can’t say how he got it on,” Lindstrand said. “It seemed more like a tattoo or a drawing on the lobster rather than something growing into it.”

Different theories were shared between the crew, but despite being in the business of lobster fishing for the last four years, Lindstrand says that:

“This tells me there is a lot of garbage in the ocean, if that’s what’s happening to the lobsters we get out from the water.” and that “It’s the first time I have seen garbage imprinted on an animal,”.

It is also apparently the first time Matthew Abbott, the Fundy baykeeper and marine program co-ordinator at the Conservation Council of New Brunswick, has ever heard of anything like it.

“This is really a unique instance,” Abbott said. “I haven’t seen something like it before, of such a clear imprint of a can on a marine animal.”

He furthermore describes this photo as revealing our oceans’ story.

“Where [the lobster] was living, there was garbage infiltrating even into the deep water,” said Abbott.

The next passage the CBC discusses is called [and we quote]:

Abbott said this is a serious issue. There’s no week where he does not have a discussion about marine debris in New Brunswick’s coastal waters.

Human garbage “is really widespread, just about anywhere,” he said. “You can’t really name one hotspot because it is well too widespread for that.”

The problem with plastics, according to Abbott, is they break down and get small but does not go away.

“The smaller something becomes the more it looks like food to animals of various sizes. Once ingested, it can cause all sorts of problems.”

Some animals have even died. There is also the risk of entanglement. Once a marine animal is entangled in debris, it might not be able to carry out its regular functions.

“And so they won’t be able to survive,” said Abbott.

Abbott said the Conservation Council has been working with provincial and federal governments as well as other non-governmental organizations to try to tackle some of the issues with debris.

Yet animals like the lobster, Lindstrand found are still dealing with garbage problems.

Lindstrand and her crew members sold the lobster with the Pepsi can claw along with the other ones that day.

“It is probably in Boston,” she said. “It probably already crossed the border.”

But Lindstrand still finds herself wondering how on Earth that lobster got that “Pepsi tattoo.”

How can the federal, EPA, state, or provincial government not act on this issue. How is #metoo or the discussion of Climate Change get more attention than Marine debris- and more specifically Plastic Pollution get overlooked, when it is affecting our food, ecosystem, and health?

Plastic Continents hope that by spreading awareness through rewriting articles, light can be shed on the issue, and consumers around the world begin to realize that actions need to take place to stop the plastic pollution from continuing and generate alternatives in reducing the issue, today.